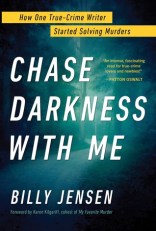 Chase Darkness was a bit of an impulse buy. It came up in my search of “best audiobooks of 2019” (or something along those lines) and as usual, I bought it because I thought the narrator sounded good.

I recently listened to Michelle McNamara’s audiobook, I’ll be Gone in the Dark, which I really liked, so I figured I give this one a try too. The non-fiction nature of true crime translates pretty well to audio format and I was not disappointed. What I did not realize until listening to this book though, is that the author, Billy Jensen, is actually the author that finished Michelle’s book after her death. So it made for a really interesting read because he references Michelle’s book throughout and spends a chapter discussing the capture of the Golden State killer, which had not occurred at the time of publication of I’ll be Gone in the Dark.

So I do feel a bit like I stumbled upon this whole fan base of true crime and citizen solved crimes. Billy Jensen is a journalist. Unlike Michelle, he wasn’t totally focused on solving one single case, although there were crimes that have stuck with him over the years that he would really love to see solved. But Jensen’s real focus was on solving crimes through crowd sourcing on social media. He was haunted by several criminals who have never been ID’d, despite the police having decent photos or videos of them. Billy wondered if any of these crimes could be solved using social media. He experimented a bit with crowd sourcing and suddenly he was actually helping solve crimes!

That does make it sound a little bit easier than it actually was. In many cases Jensen was not able to get an ID on the criminals or killers, but in other cases, sharing crime videos and photos on platforms like facebook, and targeting the audience to a radius around where the crime was committed, did actually result in positive ID’s of the criminal!

I found this book interesting because it does look at a variety of cases instead of just one, and there is the immediate satisfaction of finding the answer to crimes that are many years old. Plus it was interesting to learn about the frustrations Jensen faced when he either couldn’t get an ID, or worse, did get an ID, but never a conviction or even an investigation because the police just couldn’t build up enough evidence. It was interesting that some of the criminals were ID’d based not on facial recognition, but recognition of their size, voice, gait, or general demeanor.

I’m not going to discuss any of the cases in my review, there wasn’t any particular case that stuck out to me. Mostly it was just interesting learning about citizen investigations. I find true crime fascinating enough, but I’m definitely not an aficionado, though it was interesting learning about people that are. There’s definitely a huge portion of people out there that are obsessed with true crime and solving decades-old crimes. Jensen is one of them and did let his obsession take over his life, especially once he actually starting solving crimes and had the police and victim’s families actively approaching him for help.

The book did end a little earlier than I was anticipating, because the last part is dedicated to citizen solves and is basically Jensen advising people who want to get involved in citizen investigations. That’s personally not me, so I skipped the last bit, but still enjoyed the book overall. It’s narrated by the author and I thought he did a good job.

I do think it enhanced the experience that I had already read Michelle McNamara’s book, so I’d maybe recommend reading hers first, though definitely not necessary. Both books had similar topics, but offer different listening experiences.

One thought on “Chase Darkness With Me”