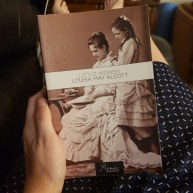 Little Women has been on my TBR FOREVER and I’m so happy to finally have read it! I picked up the world’s ugliest copy of Little Women at a book sale back before I was a book collector and it has just been sitting on my shelf taunting me for years. So thanks very much to my book club for this one because we decided to do classics month for September and we all read a different classic. Plus I couldn’t have had better time timing to read this with the new movie coming out this Christmas.

So what did I think? Little Women is exactly the kind of classic I love. It’s poignant and character driven. At times it reminded me of Anne of Green Gables, although it poses no threat at dethroning Anne as one of my all time favourites. I really liked Meg, Jo, and Beth, and even Amy grew on me over time. It’s a book about many things, but mostly it’s about family, love, and growing up. And I do love a good coming of age book.

I have to admit though, as much as I enjoyed the themes of this book, it is damn boring at times. I felt like I never built up any momentum while reading it. When I started I calculated that I had to read 2 chapters a day in order to finish in time for book club, which would usually be a joke for me, but I really did struggle to read more than 2 chapters a day and finished it with only 2 days spare. I did pick up speed at the end, but it was more out of a desire to move on to something else.

So I did want to acknowledge that there is a lot of fluff in there that I think could be cut out, but honestly that could be said of most classics. However, I did still give this 4 stars, despite my pacing frustrations. It is a little heavy with 1800’s morality, but there’s a lot to love about Little Women. Namely, Jo. The novel features all 4 of the March Sisters, focusing on different sisters at different times, but it’s hard to deny that Jo is the main protagonist of the story. Which makes sense when you learn that this is a largely autobiographical novel, with the author cast as Jo.

Jo is the kind of independent, rule-breaking, inspiring woman that I love to read about. So much of classic literature is focused on men and written by men, that it’s always amazing to see mold-breaking women like Anne Shirley, Francie Nolan, Scarlett O’Hara, and Jo March. There were (and still are) so many expectations placed on women about what their goals should be and what roles they should fulfill as they mature. The roles primarily being wife and mother. But women are amazing and not content to sit within the roles that society has defined for them and I love reading about women who try and break free of that mold – doesn’t matter what the era – but it is particularly more impressive in older books.

Jo March is a girl who wishes to an extent that she could be a boy. Not because she particularly wants to be a boy, but because she wants the opportunities afforded to men. The only role that’s ever been defined for her is housewife and she wants to be free and independent to chase after her own dreams. And Jo’s biggest dream is to be a writer. She faces all kinds of challenges in getting her work published, but it’s something she decides to go after because she loves to be able to provide and take care of her family.

So I do think that Jo is pretty revolutionary for her time, but what I really loved about Little Women is that Alcott doesn’t want to showcase just one kind of woman. Yes, Jo is different and important, but I loved the contrast between each and every sister and how each of them was just as special as Jo and their dreams just as important. Jo initially struggles to understand her older sister Meg because she sees all the talents that Meg has to offer the world and it breaks her heart to see them lost for Meg to be a housewife. But we all have different dreams and they are all valid. We need women that want to break down the barriers that have confined us, but we also need women that have a great love for people. Women who are kind and empathetic and want to take care of others.

Amy and Beth have different dreams still. Amy is spoiled and selfish and thinks mostly of herself, but learns to control her ego and to put her efforts into others and not just herself – that being kind and selfless can still bring us rewards beyond what we could dream. I do wish Beth had played a larger role in the story. She is extremely shy and battles health issues throughout most of the book, so her interactions with other characters are much less than the other sisters, but she does serve to demonstrate how every individual has the ability to have a profound impact on those around them.

I have to get into some spoilers now, though this is a 150 year old book, so there’s probably not a whole lot left to spoil for people, but I have warned you nonetheless. Spoilers ahead.

One of my favourite parts of this book was Jo and Laurie, though they broke my heart more than once throughout reading. I loved that they became such good friends in an era where boys and girls weren’t really encouraged to be friends with one another. Their upbringings and circumstances were very different from one another, but they were still able to develop a close bond, despite the differences in their experiences. But what I loved most was that Jo rejected Laurie’s romantic advances and that was the end of it!! I thought that was totally revolutionary for a book published in the 1860’s! Because they’d been such close friends growing up, you expected for romantic feelings to develop between them. I wasn’t surprised that Jo rebuffed Laurie because that was totally in line with her character as an independent woman, but I was totally expecting for Laurie to try again to win her over and that she would change her mind. I loved that she knew they weren’t meant to be together, was firm in that belief, expressed her feelings, and then moved on without jealousy or regret. It was wonderful.

But then of course, Alcott has to go and ruin it all by deciding to pair up Laurie and Amy. This was completely disappointing to me because it’s a jarring change after watching Jo and Laurie interact together for 80% of the novel. It was like she had to give everyone a happy ending. I’m glad that Jo and Laurie were reconciled, but I’m sorry, if my best friend who professed to be in love with me started shacking up with my sister, I would definitely be a little pissed and jealous. So I guess Jo is just a better person than I am. I’ll also blame the setting a little because it’s not like casual dating was a thing back then.

I wasn’t really feeling the professor either, but hey, even the most independent of women still want to love and be loved and I don’t think there is anything wrong with that message.

On a side note, I finally let myself watch the trailer for the new movie coming out at Christmas and OMG it looks so good! Like I seriously think it looks even better than the book because there won’t be any over-indulgent rambling. Emma Watson and Saiorse Ronan are two of my absolute favourite actresses and I think Saiorse is actually the perfect casting ever for Jo! Plus Emma as Meg and Meryl Streep as Aunt March! Not a huge Laura Dern fan though, so we’ll see how she does as Marmee. I haven’t really seen any of Timothee Chalamet’s movie’s, but he’s pretty much exactly how I pictured Laurie, so I’m excited for it!

So overall, I thought this book had some flaws. I’m not sure I’ll ever have the patience to read through it again, but I can finally say I have read it and it did live up to my expectations!