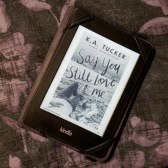 Thanks to Atria Books and Netgalley for providing me with a free advance copy of this book in exchange for an honest review.

The Simple Wild was one of my favourite books of 2018, so I couldn’t wait to get my hands on K.A. Tucker’s new book. I’ll admit, this one didn’t appeal to me quite as much as The Simple Wild, but as someone who worked as a camp counselor as a teenager and also works in a male dominated field, I thought me and Piper could probably relate.

Overall, I liked this book and it kept me engaged throughout, but it definitely couldn’t hold a candle to The Simple Wild. I was looking forward to a slow burn romance, which I got to a certain extent, but mostly this book just left me scratching my head about who the intended audience is.

Say You Still Love Me is about 29 year old Piper Calloway, a senior VP at her Dad’s billion dollar development firm, Calloway Group. Piper is slated to take over the company when her father retires, but as a young woman, she struggles to be taken seriously in this male-dominated environment. Piper is thrown further off guard by the arrival of her first love, Kyle, who takes a job as a security guard in her building. Piper and Kyle fell in love 13 years ago at Camp Wawa when they were counselors at 16. The relationship ended suddenly and PIper always wondered what happened to Kyle and his sudden reappearance forces her to confront questions that have been buried in the past.

The story is told in alternating timelines between 2006 and 2019. The 2006 timeline is a whirlwind camp romance, while the 2019 timeline is more of the slow burn romance I was looking for. 16 year old Piper is totally head over heels for Kyle and acts how you might expect a dopey teenager in love to act. Whereas 29 year old PIper is a high-powered executive who’s trying to figure out her love life while also running a billion dollar company.

Which is why I questioned who the intended audience is. As a 28 year old, I was thrilled to read a new adult book about a successful young woman in her late twenties. I was less interested in reading about a gushy teenager having her first romantic and sexual experiences.

I really think this book is intended for young professionals rather than young adults (teenagers), and no offense, but as a 28 year old, I don’t want to read about Piper’s first fumbling experiences with sex. I’m not a prude, but I don’t really think this book is appropriate for 16 year olds, which begs the question, who is it appropriate for? I don’t have a problem with sex scenes in young adult books because we all know teenagers are having sex, but I’m more a fan of the less-explicit, cutesy love scenes. These are definitely explicit adult sex scenes and as an adult I don’t want to read about two 16 year olds experimenting with blow jobs.

So a lot of the romance made me uncomfortable because I felt too old to be reading it, even though I think I was the intended audience for the book. I also struggled to buy into Kyle and Piper’s romance 13 years later. I do think that your first love holds a bit of a special place in your heart, but these two dated for 6 weeks and then never saw each other for 13 years. I did believe that they would still be attracted to each other and maybe pursue something, but I didn’t buy into the whole no-one-else-measures-up-to-you, I’ve-been-missing-you-for-13-years bit. Mostly because it’s kind of sad. I had to agree with Kyle that he and Piper came from such different backgrounds, it was never going to work between them. Everyone changes and grows an inordinate amount between the ages of 16 and 29 and I thought it was a bit disingenuous to pretend like they were still the same people.

So as a romance, this didn’t really work for me. But part of what made the Simple Wild so great was that it wasn’t just a romance. It was a book about family relationships and choices. If you removed the romance from The Simple Wild, it still had a lot to offer. That’s what I was hoping for from this book and like I said, I was excited to read about an ambitious 29 year old woman trying to make it in real estate development and construction.

Piper was pretty baller as a VP, but unfortunately I didn’t love this story line either. I was thrilled to see a young woman in a position of power, but I was disappointed by how she got there. Was she deserving of a senior partner role? Potentially – I think she had the skills to get there some day, but I’m sorry, as a 29 year old, she was definitely only there because of her father. I was angry about how a lot of the men treated her, but I couldn’t help but agree that it was nepotism that put her there and that’s not the kind of role model I’m looking for. I felt like I was supposed to believe that she got to her position by her own merits, but she so obviously didn’t. It’s so hard for women to get senior management positions and it was irksome to see someone who only made it there because of her father. It was uninspiring.

I also struggled to like Piper. She was a spoiled rich girl. I like that Tucker’s heroines are flawed – Calla definitely got on my nerves sometimes, but at the end of the day, she really grew as a person and I loved watching that process. Piper answered all of her problems with money. She really doesn’t understand how people like Kyle live and her privilege and wealthy father provided her the opportunity to basically live in ignorance. I saw the ending coming a mile away and I was disappointed in Piper for never checking in on her friends after camp or following up on the “incident” that we wait the whole book to find out about.

Kyle talks about how grounded Piper is being nice to her assistant and talking to the old security guard every day and letting her friends live in her penthouse, but I thought those were all just signs of being a normal, nice human being, nothing extraordinary. Piper was a total Daddy’s girl and I always find those kinds of father-daughter relationships creepy. Like she’s your daughter Kieran, she’s not your possession. You have no right to make decisions for her or keep things from her. But I think a lot of girls will still probably like this because America romanticizes the father-daughter relationship and creepy, overprotective, possessive behaviours. It was just not for me.

Unfortunately the writing of this review is diminishing my opinion of this book and I’m struggling to find what I did like about it. I didn’t like Piper’s dad, who demonstrates textbook signs of emotional abuse, I didn’t like how entitled Piper was, and I didn’t like how easily she forgave some pretty sketchy things that Kyle and her Dad did. Even her friends were a bit of a mystery to me. I understand why she stayed friends with Ashley, but I never really understood Christa or how they ended up being friends. They seemed to have nothing in common.

Overall, I just couldn’t suspend my disbelief for this book. I know romances are sometimes over the top, but I prefer ones that are more grounded in reality. I didn’t think this book had a whole lot going for it outside the romance and since that didn’t cut it for me, it didn’t have a lot to offer. The writing is still good though – I didn’t struggle to read this – even though I didn’t enjoy the subject matter. Tucker is good at writing witty dialogue and I thought that held true in this book, it just wasn’t as good coming from two lovestruck teenagers.

5 thoughts on “Say You Still Love Me”