I read some really great books over the past few months, so I decided to take a look back at some of my favourite reads this Winter (Jan-Mar). I read a total of 32 books and it was really hard to narrow down the field. I re-read a few old favourites (Jellicoe Road and Beartown), but I decided not to consider these since they weren’t new winter reads and I’ve talked a lot about them already. So, my top 5 reads of Winter 2018 (in no particular order) are as follows:

Girl in Translation by Jean Kwok 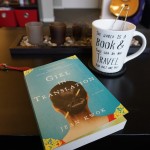 I read this as part of my January Challenge to read 3 books about immigration and I loved it! It’s a simple story about a girl and her mom who immigrate from China to America and struggle to make it in New York City. They live in a horrible apartment with no heat and work long hours in a sweat shop sewing clothes, receiving little support from their family. But the main character Kimberly is determined to get an education to lift herself and her mother out of poverty. Girl in Translation tells of her struggles throughout middle school and high school – I thought it was just such a quiet, meaningful story.

I Am Not Your Perfect Mexican Daughter by Erika L Sánchez

I listened to this one as an audiobook and it was the first fictional audiobook I’ve loved. Julia is the teenage daughter of Mexican immigrants whose older sister Olga has just died in a tragic accident. In the wake of her death, Julia struggles with her grief and her inability to live up to her mother’s ideal of the perfect daughter. She acts out against her family and those around her, shutting herself off from the world in her anger. Julia is not a likable character, but her grief was just so raw and real that I couldn’t help but love her, despite all the questionable choices she makes. A fantastic read about grief and identity and special props to the audiobook narrator Kyla Garcia, who is fantastic! 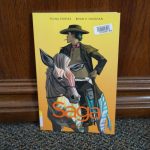 I’ve been reading my way through the graphic novel series, Saga, for a while now, but something about the latest issue struck me so much more than all the other volumes. Saga tells the story of Alana and Marko, an intergalactic family who fall in love despite coming from two opposing sides of a war, and their newborn daughter Hazel. The story follows them across the galaxy as they try to be a family despite all the people and governments who want all evidence of their traitorous relationship to be eliminated. Vaughan weaves so much relevant social commentary into this series about families, violence, relationships, and politics and Fiona Staples artwork is amazing! The artwork is NSFW, but a fantastic and engaging series!

The Marrow Thieves by Cherie Dimaline 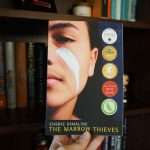 I picked up this book because it made the Canada Reads shortlist for 2018 and I’ve been trying to read more Canadian authors and it did not disappoint. I can’t pinpoint why I loved this book so much, it’s a pretty short science fiction read about a dystopian future where indigenous people are hunted for their bone marrow. The government has constructed a second round of schools for indigenous peoples to harvest their bone marrow that are chillingly familiar to the residential school system. The book tells the story of one group of indigenous individuals who form their own kind of family in the woods to try and protect themselves. We slowly learn everyone’s back story throughout the novel and you can’t help but admire them for their hope and tenacity. I thought it was a meaningful and beautifully written story.

The Colony of Unrequited Dreams by Wayne Johnston 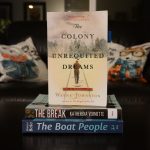 This book surprised me. It was really hard to pick the last book for this list out of all the 4 star books I read this season, but this one just stands out for me. I didn’t expect to like it that much and it is a looong book, but Johnston dragged me right into his story and I was completely captivated by Fielding and Smallwood and their love for Newfoundland. I read Don’t Tell the Newfoundlanders a few years ago and I feel like this was a good companion novel because together they examine both sides of Newfoundlands journey to confederation with Canada. I really liked Johnston’s writing and it was a moving read about a place so dear to my heart.