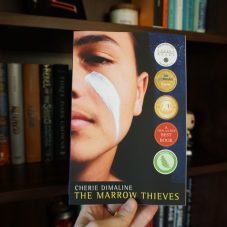 “Sometimes you risk everything for a life worth living, even if you’re not the one that’ll be alive to see it.”

This was a beautiful book! I’m so glad it’s in the Canada Reads shortlist this year because I think it’s unlikely I would have discovered it otherwise and that would have been a shame because the writing is so gorgeous!

The Marrow Thieves is a short novel by Métis author Cherie Dimaline about a dystopian Canada that has been ravaged by climate change and disease and a large portion of the population has been wiped out. In the aftermath, everyone but indigenous peoples have lost the ability to dream. In an attempt to discover why the government starts constructing new schools (that mirror the old residential schools) to study indigenous peoples. It turns out that the ability to dream comes from your bone marrow and the government starts rounding up and experimenting on indigenous peoples to harvest their bone marrow.

Frenchie has slowly lost everyone in his family and finds himself alone in the woods. He follows his family’s plan to head North and eventually runs into other bands of ‘Indians’ who are slowly treking their way North as well and he is adopted into a new family and they travel together. Their group consists of an elder, Minerva; their leader, Miig; and several other young people who have lost their families. Miig tries to preserve the old ways through story-telling and everyone has the opportunity to tell their own ‘coming-to’ story.

I loved the writing in this book and learning everyone’s story – hearing about their struggles and how they came to end up part of this little adoptive family. They all come from different backgrounds and families, but they have retained their ability to dream and their desire to survive in the angry world around them. Miig teaches them how to hunt, cook, fight, and survive in the wild and how to connect back to their original roots.

I really liked this because I thought by telling this horrifying, dystopian story, Dimaline was able to convey some of the horrors that have been committed against indigenous peoples in the past in a way that enabled you to empathize emotionally with them and better understand how they felt. On paper, everyone knows about the residential school systems and the struggles of indigenous peoples to retain their culture, but that part of history feels a degree removed and it’s shameful so I think people generally avoid thinking about it.

It reminded me a little of Tim O’Brien’s book, The Things They Carried, in it’s ability to use exaggeration to convey emotion. The Things They Carried is a book about O’Brien’s experience in the Vietnam War that is written to read like a memoir, but is actually partially fabricated. O’Brien’s essay about being drafted and his internal debate about whether he would defect to Canada to avoid going to war is one of the best essays I’ve ever read. It reads like non-fiction and is an exaggerated account of O’Brien’s experience, but it is so effective because the exaggeration is what enables to you really feel his despair, frustration, and hopelessness. Dimaline’s horrifying account of the marrow thieves is what enables you to relate and empathize with the persecution of indigenous peoples throughout Canada’s history. I mean, I obviously empathized with them before and thought the residential schools were horrifying, but this book uses science fiction and exaggeration to evoke a much stronger emotional reaction.

Indigenous peoples are obviously incredibly tenacious and this book re-iterated that. It is really a pretty simple story about family, love, and the bonds we build with those around us. Who are we when everything else is stripped away from us? What can we become when faced with adversity, antipathy, and violence? Is family blood or the bonds we build we those we love? I thought this was a thoughtful, well written novel and I would definitely recommend to all Canadians! I read both The Boat People and The Marrow Thieves and while I really liked them both, I think this was my favourite of the two.

3 thoughts on “The Marrow Thieves”