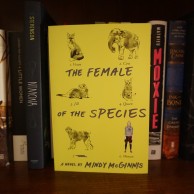 This was so DARK.

I cannot figure out my feelings about this book. I pretty much read it in 2 sittings, so it’s a pretty quick read, but it packs a punch.

The Female of the Species is told from 3 points of view: Peekay, the preachers kid who has just broken up with her boyfriend; Jack, the popular guy trying to get a full ride to college; and Alex, whose sister Anna was raped and murdered several years prior. Alex is a loner and mostly people don’t think about her, but what they don’t know is the dark feelings Alex struggles to hide inside her.

From the synopsis you think this is going to be a revenge novel, but it’s mostly focused on relationships. I knew it was going to be dark, but I was surprised by how sweet some parts of the novel were. Peekay and Alex work together at an animal shelter and start an unlikely friendship in their senior year. Peekay is still reeling over her boyfriend breaking up with her to hook up with the most popular girl in school, Branley, and Branley is secretly hooking up with all-star Jack. Until Jack meets Alex and can’t shake her from his mind.

There’s a lot of cheating and hook-ups in this book and Branley plays the role of the villain trying to steal everyone’s man, but I liked how honestly McGinnis tried to portray her. Yes Peekay hates Branley for stealing her boyfriend, but the author still wrote a really interesting relationship between them, which gave Branley a lot more depth. She also highlights the culture of slut shaming and I liked when Alex defended Branley’s right to have lots of sex and enjoy it, without being cast in the role of slut.

Ultimately this book is about rape culture. After Anna’s death, Alex struggles with all the casual rape jokes and with anyone even touching her or her friends without consent. When creepy guys threaten her friends, she lashes out at them and hurts them in the same way they intended to hurt women, but the hurts she causes are perceived as so much worse than the potential hurts an assault would cause the victim. There’s a minor scene in gym class where she watches her classmates and teacher ignore one of the guys pretending to simulate sex with his basketball and comments that if she were to act the same way as a girl, people would lose their damn minds.

I liked Alex but she still scared the life out of me. I liked that she erased graffiti against other girls in the washroom, that she always looked out for Peekay, and that she was totally comfortable in her sexual experience (“it’s okay if we wait to have sex”, “I know” lol). I don’t really know what to comment about Alex’s violence. Obviously you can’t just go around killing people no matter how bad they hurt you, but portraying her character this way was an effective way to get your reader thinking about rape culture and all the ways it impacts and hurts people.