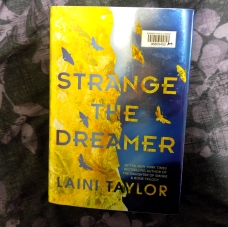 I so wanted to love this book. I only recently discovered Laini Taylor and loved her Daughter of Smoke & Bone series. Taylor has a beautiful writing style and Strange the Dreamer was definitely very well written, but the story didn’t draw me in the same way.

The plot sounded bizarre from the synopsis and was just as bizarre in reality. There are two stories being told in parallel and they both focus on the mythical city of Weep. 200 years ago Weep was cut off from the rest of the world and it’s name was collectively forgotten by the rest of humanity (they call it Weep for its lack of name). No one knows what happened or what powerful force could make everyone forget the city’s name.

Miles away, junior librarian Lazlo Strange is obsessed with the city of Weep and can’t believe it when the godslayer and his warriors show up and recruit Lazlo to join them in search of the lost city. In parallel to Lazlo’s story, we learn about a family of blue-skinned gods who secretly live above the city of Weep and discover how they came to be there and what role they had to play in the lost city.

I loved Daughter of Smoke & Bone from the first page, but I found Strange the Dreamer slow moving and I didn’t find the characters very captivating or care what happened to most of them. I did enjoy the plot between Lazlo and Nero and I’m interested to see what happens with them, but I had zero interest in the gods/monsters and I did not enjoy the romance part of this book.

It seems like most people are loving this story though, so it might just be a personal preference. I definitely can’t find any fault with Taylor’s writing and her prose was just as wonderful as always! Unfortunately for me though, the purple prose wasn’t enough to make up for how boring I found the story.

This is the sister-post to my Top 10 Books of 2017 post. I read way too many books this year to pick only 10, so I split them into my 10 favourite new releases and my top 5 favourites that weren’t published this year (but that I read this year). Here’s the other 5:

I talked up the Shades of Magic trilogy in my other post, but Daughter of Smoke and Bone was definitely my favourite fantasy series that I read this year. This is the first book in a trilogy about a world of angels and demons that have been at war for decades, but the war is slowly starting to bleed into the human world. Karou is a art student in Prague; she was raised in the human world by two beings, Brimstone and Issa, that could only be described as monsters. Brimstone and Issa never enter the human world, but through their shop, Karou can open doors to anywhere she wants in the world and begrudgingly runs errands for Brimstone all over the globe. Until one day when an angel, Akiva, shows up a destroys all of Brimstone’s portals, disconnecting Karou from those who raised her and leaving her stranded alone in Prague.

It’s a pretty epic story and it had some really amazing characters. There were so many interesting concepts and fantasy elements introduced into the story and Taylor’s writing in this series is fantastic! But setting was key for me. I loved Taylor’s depiction of Prague and later Morocco. She created a really good atmosphere and I loved learning all about Karou’s Prague and Akiva’s world.

If any book bridges the gap between genres, it’s this one. I’ve listed it as Young Adult, but it’s also part Historical Fiction, part Fantasy, part HILARITY. I picked it up because I loved The Gentleman’s Guide to Vice and Virtue and pretty much every review I read compared it to My Lady Jane. Together they were definitely the two funniest books I read this year.

My Lady Jane is essentially the re-imagined history of Lady Jane Grey, the 9-days queen from the 1500’s who reigned for 9 days and then literally lost her head. It’s told from 3 different points of view – Jane, King Edward (who dies and leaves Jane as Queen), and G (her betrothed) – and it’s actually written by 3 different YA authors. The premise of the story is based in fact, but the authors take a lot of liberty after that and infuse some fun fantasy elements into the story. I loved it! Plus I discovered they’re writing two more novels about historical Janes, so watch for My Plain Jane next year!

And Then There Were None by Agatha Christie (Mystery)

Why have I never picked up an Agatha Christie novel before this year? They are so much fun!! I read 3 of her books this year, but And Then There Were None was definitely my favourite. From what I understand this is the quintessential Christie novel. 10 strangers are invited to attend a party in a mansion on an island owned by a wealthy mystery host, but when they arrive they find the host missing. One by one the guests start dropping dead and with no way off the island everyone starts to descend into a state of panic. After a thorough search of the (small) island reveals no one else is present, the remaining guests must face the dark realization that the killer is hiding in plain sight. So deliciously fun!!

Confession, I didn’t even know who Trevor Noah was until my book club picked Born a Crime as one of our monthly reads. I always say I dislike memoirs, but I may need to change that opinion because I’ve read several this year and I loved all of them! I wasn’t expecting much out of this book, but Noah delivered a hilarious, yet sobering, story about his experience growing up ‘coloured’ (mixed-race) in South Africa both during and after Apartheid. If you’re interested in learning about how he ended up on The Daily Show in this book, you’ll be disappointed because he doesn’t talk about it, but if you’re looking to learn a bit more about what it might have been like growing up in post-apartheid South Africa while simultaneously having a good laugh, then this is the book for you! I loved Trevor’s writing and I’m now a fan of both his stand-up comedy and The Daily Show!

This was another book club selection that I was not interested in reading, but then loved once I started it! Dark Matter is one of those fast-paced, un-put-downable novels. I don’t even know how to describe this novel. Jason Dessen is abducted one day by a masked assailant and wakes up in a life that is not his own. In this new life he is a renown Scientist, but his wife is unknown to him and his son has never been born. Jason is pulled into a world he never knew existed, but more than anything, he just wants to return to the wife and son he’s left behind. In order to do so, he must go on an epic journey through both space and time. I thought the plot sounded so bizarre, but it was so enthralling! You don’t need to be a big sci-fi fan to enjoy this!

I was not expecting to like this book as much as I did, but with all the hype about Strange the Dreamer I decided to give this series a try first. The plot is a little outside of what I usually read, but I’m so glad I decided to broaden my horizons because this was wonderful!

Even with the bizarre plot in Daughter of Smoke & Bone, Laini Taylor had me hooked from the first chapter! Karou is a young art student living in Prague; she’s just broken up with her loser boyfriend, Kaz, and would rather spend her time drawing pictures of monsters with her best friend Zuzana. But Karou’s secret is that all the monsters in her sketchbook are real. She was raised by two of these monsters, Brimstone and Issa, in a shop with a door that can transport Karou to any city in the world, and often does as she runs strange errands for Brimstone, collecting teeth in exchange for wishes.

But Karou’s world is torn apart when strange scorched handprints begin showing up on all of Brimstone’s portals and she finds herself alone in Praque, cut adrift from the only family she’s ever known.

I immediately liked Karou, thought the dialogue was witty, and I loved the setting. Actually, I thought the setting was one of the strongest parts of the novel and created a sense of mystery and excitement from the very beginning. I really enjoyed learning about Karou’s Prague and I found Brimstone’s shop with it’s many portals intriguing. Plus I had a good laugh watching Karou mess with Kaz!

This was my first Laini Taylor book, but I can see why everyone loves her – her writing style is excellent and I loved the depth of her characters. Zuzana was one of my favourite characters and I’m so glad she stays in the entire series. The novel is centered on a romance, but it never felt too romance heavy. Karou and Zuzana had a great relationship and I loved watching their friendship grow and the way they supported each other.

The reason this one gets 4 stars instead of 5 though is because I didn’t think the second half of the novel was a strong as the first. I know Madrigal and Akiva’s story is central to the series, but the change in the storytelling felt very abrupt. I found Karou’s errands for Brimstone fascinating, as well as the whole concept of trading in wishes. I was captivated with the mystery of the teeth and where the scorched hand-prints were coming from. Once Akiva entered the story I found the pacing a little off and I didn’t like having to put aside Karou’s story to learn about Madrigal.

I still really enjoyed Madrigal’s story, but I wish it had been better integrated in the story. I felt like Taylor was taking a break from the main plot to tell us this side story, but then the side story ended up being the entire second half of the novel.

Despite this shortcoming, it was still a fantastic novel and I will definitely be reading more of Taylor’s work! A+ for setting and relationship building!