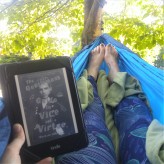 The Gentleman’s Guide to Vice and Virtue was wonderful! I haven’t been reading a whole lot of young adult novels lately because the genre seemed a little tired and everything felt more or less the same, but the genre has definitely been growing and tackling a lot of issues around race and gender identity that general fiction sometimes seems hesitant to address.

Bravo to Mackenzi Lee for this book! The story is set in the 18th century and focuses on 18 year old Monty and Percy as they set off on a “grand tour” around Europe before preparing to settle down and begin their adult lives. Monty sees the trip as a last hurrah before being forced to take over his father’s estate and plans to gamble and drink his way around Europe with his best friend Percy, who he just happens to be in love with.

The trip quickly goes sideways and Monty, Percy, and Monty’s sister Felicity find themselves being chased all over Europe after an encounter with honest-to-god highway men. This book is hilarious and wildly fun, but it also tackles a lot of tough issues and does it without feeling preachy or forced. Monty is extremely privileged and totally oblivious to his privilege. He blunders around making bad decision after bad decision, but I loved watching him grow and be challenged.

Somehow this book manages to address race, disability, gender equality, sexual orientation, and class privilege. It had the added intrigue of tackling all these issues during the 18th century, where I can’t even begin to imagine what it might be like to be a gay, black, epileptic man. There was a lot going on, but the novel had a lot of depth and was quick-paced.

The characters were all fantastic, but I’m thrilled to discover that Felicity will be getting her own novel next year because she was by far my favourite character. She was so badass – my favourite line of the entire book had to be when she informs Monty and Percy that “Ladies haven’t the luxury of being squeamish about blood”. I loved how all the characters challenged the boxes that 18th century society tried to place them in and how they grew as individuals and in their relationships.

So I would absolutely recommend this as a fun read, but fortunately it’s not a frivolous one and I really think you will be better for having read it. It’s a large print book and it definitely does not feel like 500+ pages – I breezed through it!

5 thoughts on “The Gentleman’s Guide to Vice and Virtue”