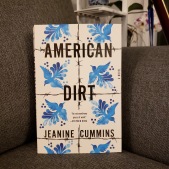 So I know this book has had its fair share of good and bad reviews. We threw this one on our book club list right after it came out because the synopsis sounded so compelling and it wasn’t until later that I heard about some of the criticisms surrounding the book. Between then and now I forgot completely everything I’d read about the book and ended up going into it completely blind. For some reason I thought this was a book about adjusting to life in America after immigration – that is clearly not the case.

American Dirt tells the story of mother and son, Lydia and Luca, as they are forced to flee across their home country of Mexico to escape the violence of the big drug cartel in Acapulco, Los Jardinos. They end up joining the many migrants who make the epic journey across Central America in the hopes of finding sanctuary on the other side of the American border.

I can see why the book is popular – it’s been compared to a modern day Grapes of Wrath and deals with a topic close to the heart of all Americans – not just those in the United States who’ve taken ownership over the term. The catch is that the book is written by a white American woman with no first hand experience of what it means to be a migrant.

Honestly, I think that even 5 years ago few people would have raised a flag about the author. Unfortunately most mass consumed literature is written by white people, but I think there has been a real shift in recent years to highlight other authors and other stories – that representation matters and that’s there’s so much value to be gained from Own Voices writers. Obviously there’s a whole genre of historical fiction where this is largely impossible and I don’t think that we shouldn’t write about that which interests and inspires us. But it’s definitely a sensitive topic and I understand why the book has been criticized for this fact.

I’d like to try and explore both sides of this issue in my review. I cannot deny that I loved this book. I am the exact intended audience. A white woman that cares about social justice but is woefully ill-informed about the migration crises south of the American border. Whether the author correctly captured the migrant experience or not, I found this book incredibly eye-opening and though it describes something I knew was happening, it really drove home the plight of migrants. I think it will likely draw attention to this injustice and hopefully inspire people to become better informed and take action on it.

That said, as a reader, I still have a responsibility to acknowledge where this account may have its shortcomings. For this I look largely to the internet, from people who have had first hand experience of migrating to America. American Dirt has a very dark plot and I found the characters had almost no positive experiences. I’m sure this is largely the case for a lot of migrants, but I also wonder if in an effort to shock and engage – Cummins took every traumatic experience she’d ever heard of and combined it all in to one book. I did worry that she was stealing from the migrant experience to create an edge of your seat social justice thriller. While this trauma is likely all based in reality, its not meant for entertainment. I thought Cummins did maintain a good hold on this balance for most of the novel, but veered a bit to the extreme towards the end. Lydia’s interaction with Javier at the end of the book and what happened to Beto really pushed it over the edge for me into the use of someone else’s trauma for the sake of a dramatic climax.

The other area where I questioned Cummins authenticity on the subject was in her portrayal of America. I read in other reviews that her rudimentary use of Spanish in the novel is belittling and that she was ignorant to large parts of Mexican culture. I’ve seen it criticized that Lydia seemed way too shocked about the things that happened in her own country, things that any other Mexican would not find shocking but be well aware of. What I did note was the consistent portrayal of America as the ultimate salvation. It took on a bit of a mythos among the characters, though I think we all know America is still hugely flawed. Cummins did capture this somewhat better towards the end with the introduction of Marisol and other deportees. but I think there needs to be some sense of reality that even people fleeing to America recognize its shortcomings.

So the book is not without flaws. To further educate myself, I did some research on other existing literature about the experiences presented in this book that are actually based on first hand knowledge. I decided to add the following books to my TBR to hopefully get a broader and more accurate perspective of the issue: The Distance Between Us by Reyna Grande, Enrique’s Journey by Sonia Nazario, Lost Children Archive by Valeria Luiselli, and the Book of Unknown Americans by Christina Henriquez, which was actually already on my TBR.

Moving on to what I liked about the book. I can’t deny I liked the writing. I connected with these characters. Not because I pitied them, but because they had such rich and emotive back stories. I liked the depth that Cummins brought to Lydia’s character and her relationship with Javier, Rebeca’s depiction of her mystical village in the cloud forest, Soledad’s quiet and reverent love for her sister and father, and the relationship that developed between Lydia and Luca, born of the grief they shared. I liked the exploration of how the immediate need to survive can overpower trauma and the fear that arises out of having no one you can trust – when anyone could be a potential informant. How violence can make you doubt even the authenticity of a 10 year old boy and how even in periods of extreme stress, people are still willing to sacrifice anything to help someone else in need.

Once I started this book, I struggled to put it down. I was on edge the entire time I was reading it and even though this will never make the reader understand how it feels to be in the characters situation first hand, I really felt the sense of urgency, the fear, and the unknown plaguing these characters throughout the course of the book. I don’t regret reading it, in fact I am definitely glad that I did. I lament that Latinx writers are not getting the same exposure as Cummins did, but I am glad to have been exposed to this story. I will try and do my best to pick up some other books on the subject with authors more closely connected to their subject matter. Looking forward to discussing this one at book club!