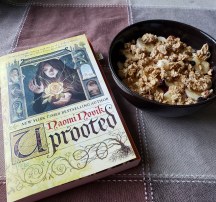 Novik’s writing is gorgeous in this book and she really knows how to create a sense of atmosphere. I really did feel the danger of the Wood lurking over me throughout the entire time I was reading this book. I thought the story was really original and well written, I just really struggled to get into it. I felt like the plot would finally get moving and then a chapter would change and the plot would get really slow again.

Uprooted has the feel of a traditional fairytale. It starts off with our main character Agnieszka, who grew up in the valley, in the shadow of the ever ominous Wood. Their valley is protected from the Wood by the Dragon (not a literal dragon, but a wizard named the Dragon), who in exchange for his protection, takes one girl to come live in his tower for 10 years, after which the girls is released, but never returns to her village. Everyone expects the dragon to take Kasia, but instead he sets his sights on clumsy Agnieszka. Once she moves to the tower, she discovers she is a witch in her own right and joins forces with the Dragon in trying to fight back to corruption of the Wood.

First off, I loved that the villain of this story is a wood. How brilliant. Not an evil wizard or neighbouring kingdom, but an evil woods, whose trees and creatures literally corrupt those who wander in, forcing them to do evil things. How futile it seems to be fighting against something as deep and dark as the woods, yet the Dragon and Agnieszka are unrelenting in the fight to drive the Wood back. But the Wood’s corruption has spread into the King’s castle as well and they must fight the corruption on two fronts.

I also thought that the character development was good. Agnieszka grows a lot over the course of the novel. At first she is afraid of the Dragon, but as she learns magic and grows to understand her power, she becomes more and more confident. She is driven by her love for the Valley and because she has grown up of the valley, she understands the Wood in a way that the Dragon, who holes himself up in his tower away from the Wood, cannot. She fights for what she believes is right and she isn’t afraid to disagree with the Dragon, or even the Prince.

Overall, the story was clever and it was really well writing, so I did like the book, it just wasn’t a quick read for me. I would still really like to read Spinning Silver, which is Novik’s new book, a retelling of Rumpelstiltskin. Spinning Silver was actually the reason I was inspired to pick up Uprooted, I’ll just need to make sure I’m in the right mindset before I pick it up.