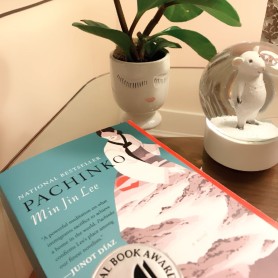 It feels like I’ve been working on Pachinko for ages, but I finally finished it. I flew through several books at the beginning of the year, but it was nice to settle down with this one, which is definitely an epic and had a lot of depth.

If you’ve been following along, I decided to read 3 books about immigration for my January Challenge and Pachinko was my second selection. I read Girl in Translation earlier this month and loved it. I picked Pachinko because it’s been getting rave reviews and it’s one of the few books I found about immigration that wasn’t a story about immigrating to America.

Pachinko begins in Korea in 1910 and takes us on a journey with 4 generations of the same family as they are forced to leave their ancestral home and build a life for themselves in Japan. This was a great history lesson and I learned a lot about both Korea and Japan and the touchy relationship between the two. Korea was colonized by Japan between 1910 and 1945 and split into North and South Korea after the second world war.

The story starts with Sunja and her parents, Hoonie and Yangjin, who run a boarding house in the small town of Yeoungdo in southern Korea. Sunja falls for a wealthy Korean visiting from Japan and becomes pregnant. Fortunately, one of their boarders, a young christian minister Isak, feels led to marry Sunja to save her from the shame of bearing a child out of wedlock and so that her child might take his name. Isak had been on his way to Japan for an appointment with a church when he stopped at the boarding house and they marry and Sunja accompanies him to Japan.

Relations between Japanese and Koreans were not good at this time and there is a lot of racism against the Koreans. The Japanese believe themselves to be the ruling class and think of Koreans as dirty and stupid. Sunja faces a lot of challenges living in Japan and the novel takes us though 80 years of history through Sunja’s children and grandchildren.

This is definitely not a fast read, but it is very impressive in it’s scope. I haven’t read a lot of historical epics (Ken Follett’s Fall of Giants trilogy is the only other one that comes to mind) and at times Pachinko felt very slow moving, while at other times I was really into it and wanted to know what would happen next. With 4 generations, we inevitably experience many deaths in this book and some of them were actually quite shocking and emotional!

There are so many great themes in this book. I loved Sunja and Kyunghee’s characters and their experiences as women and with motherhood. Lee continuously explores women’s roles throughout the novel and the expectation that a woman’s lot in life is to suffer. Their husbands and family were everything to Sunja and Kyunghee and it never occurred to them to seek happiness for themselves outside of their family. They both had dreams for their lives, yet they were always secondary to the dreams of the men. With each new generation it was interesting to see how women’s roles would change and I enjoyed when Sunja starts to question what her life might have been or could be now if she had made other choices.

The familial relationships in the story are heartbreaking. There’s so many different relationships presented in this book and they were all very beautifully written (although sometimes tragic). This family is tried again and again. They all suffered an enormous amount as Koreans, but their tenacity was inspiring in what they were able to accomplish. I really liked Kyunghee and Kim and I was really intrigued about what happened to the Koreans who returned to North Korea after the war. Lee leaves us with quite a lot of unanswered questions, but I think this is very much indicative of the relationship between Japan and Korea. North Korea was very much a big black box and you never knew what happened there. Many Koreans had to live their entire lives without ever finding out what had become of their friends and family.

I liked Mozasu’s story with the Pachinko parlours as well and I loved the themes Lee tied in with the parlours. So many Koreans were trapped in a cycle of poverty in Japan. They were 2nd or 3rd generation immigrants who had come to the land of their colonizers in search of prosperity and were then later emancipated from their homeland. It was so hard for Koreans to succeed in Japan and they were always looked down upon, yet there was nothing in Korea for them to go back to.  Pachinko parlours are gambling dens where you can play these pinball-like machines in hopes of winning. Because of the gambling, parlour owners were often mixed up in dark criminal underworld and linked with the Yakuza, the Korean gangsters. I liked that despite being rough around the edges growing up, Mozasu was able to discover who he really was in the Pachinko parlours and become an honest man, despite how easy it would have been to become corrupted.

“Every morning, Mozasu and his men tinkered with the machines to fix the outcomes – there could only be a few winners and a lot of losers. And yet we played on, because we had hope that we might be the lucky ones. How could you get angry at the ones who wanted to be in the game? Etsuko had failed in this important way – she had not taught her children to hope, to believe in the perhaps absurd possibility that they might win. Pachinko was a foolish game, but life was not.”

As a book about immigration, Pachinko was fantastic. There are so many thoughtful nuggets of information and shared experiences about immigration in this book. I was particularly moved when Mozasu had to take Solomon on his 14th birthday to get his fingerprints taken and get his documentation card so that he could remain in Japan. Even though he and his son had both been born in Japan, they were forced to renew their identity cards every 3 years and could potentially be deported to South Korea – a country neither of them had ever known. This is so relevant to what’s happening all over the world with white people spewing hate at immigrants that have been living and contributing to their countries and economies for years.

I’ll finish with a quote from Solomon towards the end of the novel which I loved for it’s hopefulness despite the decades of discrimination his family had experienced. I appreciated the relationships Lee built between the Koreans and the Japanese, to remind her readers that we are all just people. There are good actions and their are bad actions, but we are each our own and we can each actively make the decision to accept and support each other, rather than hate.

“Kazu was a shit, but so what? He was one bad guy, and he was Japanese… Even if there were a hundred bad Japanese, if there was one good one, he refused to make a blanket statement. Etsuko was like a mother to him; his first love was Hana; and Totoyama was like an uncle, too. They were Japanese, and they were very good.”