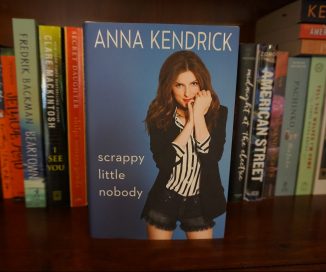 Wow, this was much better than anticipated!

I’m not really an Anna Kendrick fan, with the exception of Pitch Perfect, but Scrappy Little Nobody was surprisingly well written and actually really interesting. Kendrick spends a few chapters on her childhood to let us know she really does come from a normal family and then she jumps into how she got into acting and what it was like adjusting to fame and Hollywood.

I found her beginnings really interesting; I had no idea she started off on Broadway at the age of 12, but I guess that helps to explain why she’s been featured in so many singing roles. She talked about her first experience on a film set when she did Camp at 14 and how surreal it was when the film featured at Sundance. She was disappointed when she told her class she was going to Sundance and they didn’t seem to care, until she later discovered they just didn’t realize she meant THE Sundance because they couldn’t picture tiny little Anna occupying the same festival as mega stars like Britney Spears and Paris Hilton.

She moved to LA straight out of high school and landed the role of Jessica on Twilight. I got a kick out of listening to her talk about Twilight and how awesome it was to get a minor role like Jessica because you got to be in the film and hang out with the stars for a few weeks each film, without any of the crazy fan notoriety, because really, who cares about Jessica anyways. But the money from Twilight kept her afloat financially for two years because even after landing a role in arguably one of the largest teen franchises (AFTER HP YOU GUYS), she still lived with two guys in a crappy apartment.

The first time I remember knowing who Kendrick was with Up in the Air. I didn’t really care for it; I remember trying to read the book and then abandoning it, not liking the movie, and promptly forgetting about it. But this was really her first major role and she was nominated for an Oscar for it! I found it fascinating though because she still never really made any money until after this movie because it was never anticipated to do so well. So even when she attended the Oscars for the first time as a nominee, she was still pretty much broke and had to be forced by her stylist to buy a $1000 pair of Louboutin shoes because evidently these things matter. I enjoyed her commentary on how ridiculous it is that when you’re starting out that you have to spend money you don’t have on purchases like this, but once you legit become famous and can afford it, designers give you their stuff for free.

Kendrick had a lot of meaningful insight into Hollywood and I like that she never takes herself too seriously. I felt this was a very honest memoir and I really did feel that she wasn’t so different to me. Even though she obviously is, she now feels like a real, down-to-earth person versus just another famous person living in a fantasy world with no clue how the rest of us live.