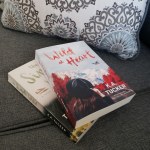 Okay, I have many feelings about Wild at Heart and it’s time to write them down before I forget! I was super apprehensive when I first heard that Tucker was writing a sequel to The Simple Wild. The Simple Wild was an unexpected favourite read from 2018, so I was kind of excited when I heard about Wild at Heart because I wanted to see what happened to Calla and Jonah and laugh along at all their witty banter again. But I’m also weary of books with sequels that don’t really need them because they’re often pandering to the readers or cheapen the story from the original book. Plus I really didn’t like Tucker’s new book from last year and I was afraid she was a one hit wonder.

But there’s a lot to like about Wild at Heart! I’m don’t think it has quite the same charm as The Simple Wild, but I really liked the direction Tucker decided to go with the story in her sequel. It was easy to predict the trajectory of the story, like I could pretty much guess it without even reading the synopsis, but it ended up being less predictable than I thought and explored a lot of new themes.

So let’s get into it. If you haven’t read The Simple Wild, please don’t bother with this review, just go check out my glowing review for the first book. For readers who have read The Simple Wild, but not Wild at Heart, I’ll try and keep it spoiler free or give you a warning if I’m about to get into major spoilers.

What made Wild at Heart a winner for me was that it really met the requirements of what I’m looking for in a New Adult book. There’s so few good books out there in the New Adult genre and until I read this book, I didn’t realize how much I’m actually looking for relatable fiction about adults who have started their career, but haven’t yet moved into the parenting world. So much literature is either YA or about fully developed families. That’s all totally fine and I’m sure I’ll be thrilled once I enter that next demographic, but right now it was so refreshing to read about a mature couple just trying to make it work and figure out their professional lives. Wild at Heart is free of childish relationship drama and older family drama. I mean don’t get me wrong, I love me a good family drama, but this really delivered something that I haven’t seen in many books.

At the end of The Simple Wild, Jonah shows up in Toronto to ask Calla to move to Anchorage with him. We don’t know what she decides, but it’s a safe assumption that she says yes. Wild at Heart picks up exactly where The Simple Wild left off and we see Calla pack up her life in Toronto to go all in on a life in Alaska with Jonah.

The move is scary, but also exciting, and at the beginning Calla and Jonah strike a wonderful balance of accommodating one another and making compromises to try and make each other happy. As you can imagine though, as time goes on, things become more challenging. Calla struggles to fit in in the Alaskan wild and Jonah stresses about money and doing something where he feels he’s making a meaningful contribution to the world. Neither doubts their love for the other, but they have to acknowledge that the new relationships is not without its struggles.

The first half of the book does have a bit of a meandering plot. It’s not obvious where the story is going and their relationship is still in its honeymoon phase, and so it’s somewhat lacking in tension. However I don’t fault Tucker for this because what I think she does provide is a very accurate portrayal of a relationship between two mature adults. It was wonderful to read about two people thinking about buying their first home together and making decisions about their professional careers. I just bought my first home and it wasn’t until Calla and Jonah started house hunting that I realized I’ve literally never seen this aspect of a relationship portrayed in a book before! It’s so much more common to read about how a couple falls in love, or how a married couple is struggling. There are so few stories dedicated to what happens after the big romantic gesture that brings a couple together. Arguably this is because romantic tension is what sells a story and it’s just not as exciting to read about the “happily ever after”, but it really worked in this book and I found it extremely relatable.

The other thing I liked about this book was Calla and Jonah’s maturity. Sure,they have their moments of weakness, and I kept waiting for them to fall apart, which they inevitably do, but not at all in the way I expected. They’re both afraid of resenting each other and they put a lot of effort into how they communicate with each other. Resentment has always been what has scared me the most about my own relationships. My fear is that if communication breaks down, then resentment builds, and that is what can ultimately kill a relationship. I spend so much time in my own life ensuring that resentment stays out of my relationships, and it was really nice to see that maturity reflected in these characters. I think Tucker had an easy narrative she could have followed in this book and she could have dramatized Calla and Jonah’s relationship more, but I’m glad she didn’t. I think it would have cheapened the story. Instead this was more a book about two people learning to live with each other and deciding if it’s something they can do forever.

I will admit, Tucker is pretty gratuitous with the sex scenes in this book. None of them were as romantic as their first night together in the safety cabin in The Simple Wild and they did start to get a bit repetitive after a while because apparently they’re both just so damn perfect. But if you’re coming to this series as a romance reader, you’ll probably be pretty happy. The book does have a lot of side plots though, which give the story more substance and I really enjoyed meeting all the new characters. I liked both Calla’s relationship with Muriel and with Roy, though I would have loved to see her make some real girl friends earlier in the book, because I think that would have made the transition a lot easier for Calla. I was really hoping for her to strike up a close friendship with Marie because I think that would have been quite radical and progressive, but I think we ended up getting something in the middle.

To conclude, Wild at Heart was a real winner for me. It wasn’t quite a 5 star read, but I’d put it at a solid 4.5 stars. Please bring this energy and insight with you to your next book K.A. Tucker, because Say You Still Love Me was such a miss for me and I really want to love all your books!