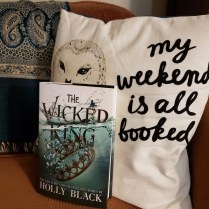 Thank you to Hachette Book Group Canada for providing me with a free copy of this book in exchange for an honest review.

Unpopular opinion: I liked The Cruel Prince (3 stars), but I definitely didn’t love it and it was so hyped up it kind of left me wondering if maybe there was something I was missing not loving it as much as everyone else. The Wicked King started off much the same, with me wondering what the big deal was. I still kind of don’t understand the insane level of fandom that some readers have over this series, but I think I did like this book more than the first one.

So I was not really feeling this in the beginning, but then once I got about a third of the way through I thought it picked up a lot and I pretty much speed read through the rest of the book in 2 days. I think my biggest issue that I don’t particularly love Holly Black’s style of writing, but I may be the odd one out here. I said this about The Cruel Prince, and I had the same thought with this book, that I felt like I was reading a middle grade novel. The plot is so obviously NOT middle grade (it’s brutal), but something about the writing strikes me as a little immature. I’m not really looking for flowery writing in my fantasy books, but something about Black’s style is just a little to simplistic for me. That said, I have a feeling the writing may be one of the reasons other readers like this so much – it is definitely a different style of writing from most other fantasy books and the characters and plot read a lot different.

The middle grade feel ends there though because the plot is anything but middle grade. My favourite part of the first book was how unpredictable the plot was and Black definitely continued that theme in this book. I didn’t see any of the plot twists coming and I was continually surprised by where she took the story. It reminds me a little of Game of Thrones in that you really don’t trust that any of the characters are safe and that really anything could happen to them.

It’s definitely a political book and it does get a little confusing at times. I may have benefited from a re-read of The Cruel Prince before jumping into this book because I forgot some of the details about Faerieland and who was good and who was bad (although do we ever really even know? Everyone flipflops so much). I thought it got really interesting in part 2 of the book when we learned more about the sea kingdom and Cardan finally stopped being a little puppet king. I like that you never know which characters you can trust, even though it makes you want to pull your hair out sometimes. Plus I thought Jude was really clever when she was in the sea kingdom. You can tell she’s really struggling in the first half of the book to maintain any kind of power and it was kind of fun to see it all stripped away from her and see her still use her wits to succeed.

I liked that Jude and Cardan both grew a lot in this book. I’m still not entirely sure what the source of attraction is between them, but I was feeling it in the second half of the book. I think I liked Cardan’s development the most. He really came into his own in the second half of the book as well and I wanted to love him, but at the same time you can’t help but be weary of trusting anyone in this book. I still don’t really know what to think about him, even after that brutal ending. WHAT IS REAL?! It’s the perfect kind of ending though in that it’s not really a cliffhanger, but it makes you desperate for the next book. It reminded me a little of the ending of ACOMAF, which also has that perfect hook to draw you back to the next book without really being a cliffhanger.

On a side note, I don’t really get Taryn and Locke. They’re a mystery to me and I really don’t know what the hell Taryn is playing at (and Locke is like the world’s biggest ass). I think I may have to read the novella because I think that gives us some more insight into Taryn’s character.

I really wanted this book back in the summer when everyone was getting arcs, but I’m kind of glad that I didn’t get it until now because otherwise it would be a SUPER long wait to the next book. Plus Hatchette Canada was so kind as to send me a finished copy, which I really appreciate. It’s still not one of my favourite fantasy series, but it is fun and I will definitely be anxiously awaiting the final book.

The Wicked King will be available in stores on Jan. 8th, 2019

Well I know what my next read is going to be!!! #callaandjonah
I've really been loving poetry lately - picked up some Canadian anthologies from @indigo
Dreams come true! Visited Hobbiton today and it was everything I pictured when I first read The Hobbit as a 10 year old geeky little reader!
Flew through this book! It was so messed up - I loved it! Who else has read Verity?