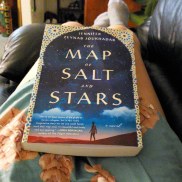 The Map of Salt and Stars is another one of those books that I wanted to love, but I just didn’t. Books like this are super important, so it’s hard to give them a bad review because I’m really glad that someone has written a split modern day/historical story about Syria. But unfortunately this novel just didn’t work for me at all.

The Map of Salt and Stars tells two stories simultaneously. The first is about Nour, an eleven year old Syrian-American who grew up in America, but whose family has just returned to Syria only to be bombed out of their house and forced to flee the country. The second story is set 800 years in the past and features a young girl Rawiya, who seeks her fortune as a map maker with the famous (and real-life person) Al-Idrisi.

Everything about this synopsis seems like a story that I would absolutely love, but the writing and characters both fell flat to me. I thought the relationships between Nour and her mother and sisters were underdeveloped and the story of Rawiya and Al-Idrisi was not engaging. I was a little more interested when I realized that Al-Idrisi was a real person, but even though Rawiya’s part of the story includes fantastical elements, it was really boring to read and I was disappointed every time the chapters switched because I didn’t want to go back to reading about her.

Likewise, Nour’s story had the potential to be super interesting, but I thought there were a lot of really weak and clumsy metaphors interspersed throughout the story and I wanted more developed relationships between all of the characters. Both stories are progressing on a road trip of sorts that align with one another, but I was never really sure what the point of pairing these two stories together was. I thought the whole secret map metaphor between Nour and her mother was laboured and ineffective. I feel like either of these stories could have been a standalone, but together neither was developed enough to really work.

I do applaud the author for what she tried to accomplish in this book and I think she has some great ideas, she just needs to keep writing and developing them into something stronger than what this book had to offer.