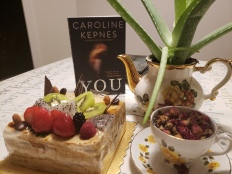 This book wasn’t quite what I was expecting, but it is definitely unlike anything I’ve read before and I thought the author did a great job on blurring the lines of morality and exposing our human ability for empathy.

I was really intrigued about this book because I heard it was written in 2nd person and it’s not a POV that we often see. It didn’t have quite the same shock value I was anticipating because I was already expecting this to be creepy and it reminded me a little of JK Rowling’s, Career of Evil, which is partially told from the point of view of a serial killer. It also reminded me of The Talented Mr. Ripley. Both protagonists are obsessive and violent and have a very flawed way of looking at the world. But even though both of these books are told from the point of view of the villain, You definitely had a unique narrative style that I think was very effective in this story.

You tells the story of Joe Goldberg, a book seller who meets a woman named Beck in his shop and falls hard and fast for her. His whole world centers around Beck; he hacks her email and manipulates her and those around her in order to insert himself into her life. Joe’s voice is jarring and crude, but felt authentic. I’m curious what kind of research Kepnes did for this book because Joe definitely suffers from mental illness and I would like to know how she got into his mindset. Even though it’s crude, I say his voice is authentic because some of the things he says definitely mirrors some of the offensive things men say on the internet and in toxic tinder threads.

Joe eludes to another woman he’s been obsessed with in the past and it becomes obvious that he is extremely troubled and has stalked and hurt people before. He doesn’t have personal social media accounts, but he has learned how to manipulate other people’s accounts to discover disturbing amounts of information about them. Kepnes explores so many themes in this book, one of which being the way social media has transformed our lives and the inherent dangers of it.

Personally, I didn’t find the social media stalking that creepy, but I think that is probably a byproduct of having read this in 2018 as opposed to 2014 when it was originally published. Social media has really blurred the lines and changed what hasn’t always been considered appropriate social behaviour. It’s so easy now to cyber-stalk people that I think many of us don’t even really think twice about it. We’ve become accustomed to having instant access to information, and while most of us aren’t trying to figure out where people live so we can stalk them, I think the average person does a lot more creeping on others than say 10 years ago.

Social media has also normalized some pretty asshole-like behaviours. People feel bolder voicing their thoughts and opinions on the internet than they do in person and repeatedly seeing hurtful and violent opinions voiced on the internet emboldens other people to say more hurtful and violent things in turn. Internet trolls have made it the norm to harrass and bully people (disproportionately women) who threaten their way of life or thought. Suddenly it’s okay to send death threats to female gamers who call for better depictions of women in video games, or say hateful things about immigrants and refugees just trying to escape their unfortunate circumstances. Joe has come to believe that he is entitled to a relationship like those he has seen depicted in books and movies and that there is no consequence too high to achieve that relationship.

But I think the main theme Kepnes explores is our human nature to want to root for someone. It becomes increasingly clear to the reader that Joe is sick, and yet Kepnes somehow makes you care about him. It makes you wonder what that says about you as a person and how you can have anxiety about a stalker potentially getting caught! Part of you wants Joe to get caught with what he’s doing, you know it’s eventually inevitable, yet at the same time you’re like, ‘OMG Joe, how could you let it slip you know her favourite movie is Pitch Perfect, she’ll guess you’re cyber stalking her!’, ‘Don’t go into her apartment, what if you get caught!’, ‘Be careful around Peach’s beach house, they might see you!’ You simultaneously want him to get caught for the betterment of everyone involved, but at the same you worry for him….the crazy stalker.

The other thing I liked about this book is that Kepnes made her other characters incredibly flawed. I think this probably helped in our ability to empathize with Joe, but the fact that Beck, Peach, and Benji are all self-obsessed, toxic people too messes with your head even more. It would be easier to condemn Joe if they were all perfectly lovely people, but they are all extremely flawed to the point that you start understanding why Joe hates them all. They’re all pretty annoying and you find yourself wishing them out of the picture as well because they are foils to Joe and Beck’s happiness, but at the same time, you know none of their actions are justification for what Joe does to them. I thought Peach was an especially great character because she’s also super obsessed with Beck and is super dislikable, but she still stays firmly on the ethical side of the line. In the same way, Beck is also a very unlikable character, which makes it easier to empathize with Joe, which makes you think you’re going crazy to actually empathize with the stalker!

I can’t pinpoint exactly why I didn’t love this. I think it’s a pretty solid 3.5 stars, but I sometimes struggle with disturbing plots like this and I think that prevented me from loving it. I appreciate these kind of books because they make me think, but they also creep me out so much, especially when they mess with your mind.

I fully anticipated how this book would end, although I did really hope I would be wrong. Overall, I am impressed with the book, but I have no desire to see this series any further. I didn’t realize it had a second book until I was almost done this book (I thought Hidden Bodies was a completely unrelated novel), but I don’t think I can see this story through any farther. As sad as it was, I liked the ending of this book and I think You works well as a standalone.

I have my book club discussion of this book tomorrow and I suspect it is going to have mixed reviews, so I’m excited to see what the rest of my club thinks of this one!