I’m a little bit delayed with this review, but I picked up Bloodlust & Bonnets at a bookstore in New Zealand because I liked the colourful artwork and thought it looked like the story might have a Nimona-style brand of humour. I was correct on both fronts!

Bloodlust & Bonnets is set in Victorian times and tells the story of Lucy, Byron, and Sham, a bunch of “queer misfits” looking for an adventure in the form of destroying Lady Travesty, the leader of a vampire cult. Their adventures take them all over Britain, with each character struggling with their own personal hang-ups while they all try and get used to being part of a team.

It’s the kind of hilarious, feel good, nonsense that despite all its shenanigans, still has a ton of relevant social commentary buried in it about gender norms, identity, and equality. It made me laugh out loud, but I also loved it for its portrayal of kick-ass female heroines, suave male poets that also like to wear fancy dresses, and gender non-conforming vampire hunters that just need to learn to trust other people. It’s a romping good time!

Disclaimer: This is a review for the first 3 volumes. However, I’ve kept it spoiler free so read on!

Why is this so good?!?! I really don’t understand, it’s just a comic about a couple of pretentious boys trying to make their high school’s fencing team, and yet I got so into it! Usually I just wait for the volumes to be released, but after reading the first volume, I had to go in search of the individual issues because it was just so good! (and I knew I would forget who all the boys were) I just finished issue #12, which encompasses the first 3 volumes, I’m just going to review them all here.

Fence is ultimately about two freshman fencers, Nicholas and Seiji, but it features an extended cast of secondary characters. Nicholas is new on the fencing scene and just really wants to be a fencer like his estranged father was. Nicholas is lacking in technique because of his lack of training, but he is very fast and has natural instinct. In contrast, Seiji has been fencing his whole life and is very technically skilled. He’s ranked 2nd nationally to fencing all-star Jesse.

Everyone expected Seiji to go to Exton, an elite fencing academy, but at the start of term, he shows up at Kings Row, expecting to win one of the 3 coveted spots on the fencing team, even though he’s only a freshman. Nicholas has won a fencing scholarship to Kings Row, but he’s only allowed to stay if he makes the team. In a surprise twist of fate, Nicholas and Seiji are roommates and quickly become rivals.

The entire first 3 volumes are just about the tryouts to make the fencing team. The boys compete in 24 matches and the top 3 ranked fencers make the school team to compete against Exton. It shouldn’t be so interesting to read 12 issues about high school fencers competing to make a school fencing team (like who actually cares about fencing these days?), but it is extremely readable and enthralling. Fence has a great extended cast that explores the rivalries and relationships that exist between all the fencers, what it means to be a good fencer, and a good sport, and how our familial relationships and support affects our abilities and psyche. There’s lots of drama between the fencers, but there’s also camaraderie. You come to like each and every one of the fencers (and the coach) and we start getting the back stories of some of the fencers.

My assumption is that after the team is established in the first 3 volumes, Pacat will expand the series to include Jesse (the #1 ranked fencer) and the rivalries between Exton and Kings Row. The first 3 volumes were fantastic and I can’t wait to see where this series goes in the future!

So I can’t stop talking about Saga this year. For some reason Volume 8 affected me more than any other volume and I found it incredibly meaningful. So I was really looking forward to Volume 9, but apparently Vaughan decided that this will be the volume in which he kills us all.

This volume was brutal. I loved it in the way I’ve loved every issue of Saga, in that it’s very original and fun, but it also destroyed me and left me feeling a little concerned for the series. Vaughan took some risks in the plot and I’m interested to see where it goes, but also a little worried! I’m trusting him to bring this story back from the brink, but losing it over the fact that Vaughan and Staples appear to be taking a bit of a hiatus after this volume!

MAJOR SPOILERS BELOW – Read no further unless you’ve read Volume 9!

.
.
.
.
.
.
If you’ve read this volume, then you of course know that I’m talking about the high death count in it. Killing off characters can be a great device to move your story forward, test your characters, and inspire your readers. But I fear 3 MC’s in one volume is a bit too much. Honestly, I can totally get over the deaths of the journalist and the robot guy (I’m seriously the worst with names), but you cannot kill off Marko!! This series has a ton of supporting characters, but let’s be real, we’ll all here for Marko, Alana, and Hazel. I’m hoping Marko comes back somehow in the next issue because I seriously don’t think I can do this series without him. Their family unit is the backbone of this series and is what makes it so special! 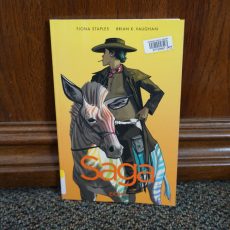 I love Saga so much. It doesn’t take very long to read one of these volumes, but they are so reliably fun and enjoyable.

Since I’m 8 volumes in and I haven’t written a review for Saga, I’ll give a brief summary. Saga is a graphic novel set in space that starts off with a bit of a Romeo and Juliet premise. Alana and Marko are from two feuding planets (well one’s a moon), Landfall and Wreath. Alana is from Landfall and has wings, while Marko is from Wreath and has horns. The two fall in love, become pregnant, and are basically chased across the galaxy by other planets and people that don’t want any evidence of their traitorous relationship.

I am just in love with Alana, Marko, and their daughter Hazel. I wasn’t totally into the idea of reading about two soldiers and their tag-a-long baby, but this is a truly fantastic series about love and family and throughout the series Vaughan tackles a lot of different socials issues. It is bit of a bizarre series and definitely NSFW (there’s a fair bit of sex and nudity throughout the series), but Fiona Staples artwork is gorgeous and I love how creative Vaughan is with his characters and storyline. His characters do some pretty bad things and make bad decisions, but he’s still able to make you love them. Each character has their own morality line about what is and isn’t acceptable and it’s interesting to watch them try and stay on the safe side of their line while still trying to protect the people that they care about.

Each volume consists of 6 issues and they’ve recently released 2 books containing 3 volumes a piece. But I’d recommend hitting up your local library for this series. 8 volumes can seem pretty daunting, but they are quick reads and I would highly recommend!