The Diviners has been on my TBR for AGES, so I’m thrilled that I finally got to it. It took a little bit longer than I would have liked, but it was a good read! I heard that the book has a slow start, which was definitely the case, but if you’re willing to stick with it you’ll find an impressive cast of characters and a unique plot.

This is definitely something I haven’t seen done before in YA. It’s paranormal, which I’m not really a fan of, but setting is key. The Diviners is set in 1920’s New York and Libba Bray does a wonderful job capturing the atmosphere of the time period. Our story centers around 17 year old Evie O’Neill. She has a quirky habit that she can read people’s history from objects, which until now she’s only used as a harmless party trick. But when she accidentally spills the local town gossip, her mother ships her off to New York to live with her Uncle.

Evie is quickly drawn into the glamour of New York and gets into all kind of shenanigans with her best friend Mabel and mischievous Sam. But her Uncle is the curator of the museum for the supernatural and when the police approach him about a ritualistic murder, Evie is drawn into the murder investigation.

This book covers so many genres. It’s YA, but mystery is a key element of the story, as well as the fantastical elements, historical content, and even a bit of horror. The story is downright creepy, though its characters keep it light. The plot is slow developing in the first half, but I quickly went along for the ride in the second half.

What makes this a winner though is the characters. It’s a large cast of characters and every single one of them has a richly imagined backstory. I feel like I’m still getting to know most of them, but this is one of those series where you can tell the first book is really only the tip of the iceberg for the plot. Bray introduces the idea of diviners and that something dark is coming on the horizon. We don’t really know what it is, but can feel it looming throughout the course of the book.

Lastly, I have to commend Bray on the representation in this book. It would have been so easy to write a book about 1920’s New York and have absolutely no representation, but here we have a black numbers runner, a queer musician, and all kinds of immigrants and misfits. The plot maybe could have done with a bit of trimming, but overall a fun read – can’t wait for the next one! 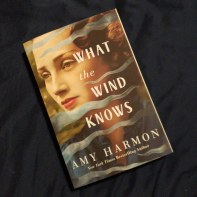 Amy Harmon is such a great writer. She’s written a ton of books, most of which I haven’t read, but I’m pretty sure she started off writing romance. Then she wrote a 2-book fantasy series (The Bird and the Sword), which I really enjoyed, and lately she’s been writing historical novels. So overall I’m pretty impressed with her scope of work and that she’s not afraid to dabble in other genres. I personally love her writing style – it definitely lends itself well to romance because it is a wistful kind of writing – but it really worked well in this book.

What the Wind Knows is a bit of a genre-bending book. I’ve been calling it “Irish Outlander”, because that’s pretty much the closest descriptor I can think of, but it definitely has a very different style than Outlander and that’s really where the comparison ends. This story is initially set in 2001 and focuses on 30 year old author, Anne Gallagher. Anne was raised in America by her grandfather, Eoin, and despite their Irish heritage and the fact the her grandfather grew up in Ireland, she has never been there. When her grandfather passes away, he requests that she finally travel to Ireland to spread his ashes on the loch next to where he grew up.

Eoin was Anne’s only real family and she is heartbroken at losing him. When she rows out into the lake, she finds herself transported to another time, 1921. Her grandfather is just 6 years old and laments the loss of his parents in the Irish uprising. Anne is mistaken for his mother and becomes part of the family. Her reunion with her grandfather provides little incentive to return to future without him, but life in Ireland in 1921 is undeniably difficult as Ireland fights to be free of Great Britain and become her own Republic.

What the Wind Knows is a bit of a slow burn novel, but I loved it. The characters are well realized and the setting and time are enthralling. Books like this are the reason I keep returning to historical fiction. I really wish more authors would branch out from the WWI and WWII fiction, because there is so much other great history to be told in other regions and eras. I should absolutely know more about Ireland’s history than I do. I grew up in Newfoundland and Ireland has had a huge influence on my own history, so I should really know more about it. I knew very little about the uprising and Ireland’s fight for independence and this was a really great introduction. I feel like there’s so much more to be learned, but it does a good job at introducing you to the hardships that existed in Ireland at this time and how Ireland descended into it’s own civil war in the 1920’s.

While this story is fiction (I mean, it has time travel, so no duh), it does feature some pretty well-known Irish historical figures, the most predominant of which is Michael Collins, who signed a treaty with England to give Ireland independent status, while still being a part of the British dominion. Previously the Irish had been united against the English, but the treaty marked a split between the Irish people – those who supported the progress made by Collins in the fight for independence, and those who demanded a full Republic and split from the Brits.

This history provides the backdrop for the story, but at its core this is still a love story. After the death of his parents, little Eoin was looked after by their good friend, doctor Thomas Smith. It is in Smith’s home that Eoin grows up and Anne and Thomas develop a close relationship. Anne had done a fair bit of research about Ireland for a new book she was planning to write, so she is distraught by the history that she knows will come to pass in Ireland and whether it is in her capacity to change it. She is also acutely aware that she doesn’t not truly understand or fit in in this time and sometimes feels a pull from the loch to return to her time.

I think Harmon did a great job at capturing the history and the two sides of this conflict, but she also writes a damn good love story. I love Outlander, but it’s really more of a trashy Scottish romp than Romance with a capital R. This book is much more soft spoken and I really grew to love all the characters. There’s nothing too surprising in the book, yet I still never knew where the plot was going to go. The writing is dreamy, but there’s still a real tension between the characters that makes you both excited and nervous for them. Time travel is cyclical in nature and because Anne exists in both present day and the past, the reader doesn’t know which came first and whether one will negate the other. If this love story didn’t exist in Eoin’s history, then can it possibly exist in his future? You fall so in love with the characters, but fear for them because you don’t know whether their love is destined to survive.